You never know where you are going to get a really fun photo of a dog.  This one was at a photo shoot for commercial products.  Christal Smith, owner of Emergency Kits 4 All (www.ek4a.com), wanted her chihuahua next to some of the emergency kits.  Between placing the product  on the black backdrop, I took a photo of her dog.  I liked this, but wanted to reposition this sweet but hyperactive chihuahua to create the photo that you see directly below: 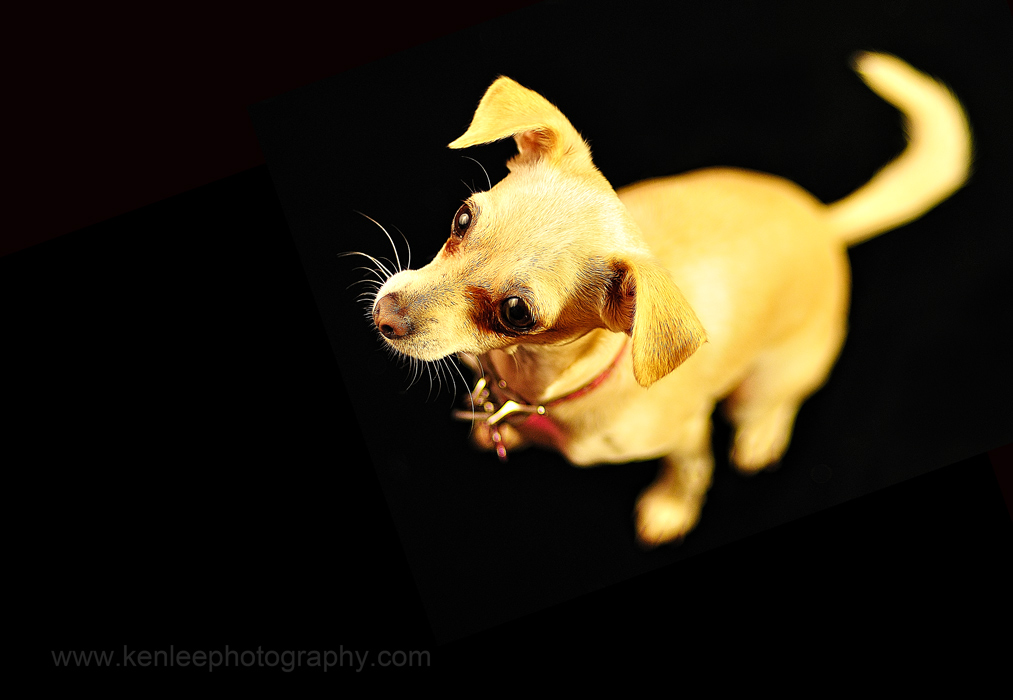 Final version of this overhead photo of Stephanie the chihuahua after moving Stephanie’s position in Photoshop CS4.

The above photo, however, wasn’t the original.  She’s a very quick moving chihuahua, and was just about to wander out of frame in the original shot, shown below:

The original photo of Stephanie the chihuahua before I moved her positioning using Photoshop CS4.

You can see she was bunched in the lower left corner.  I liked this because the placement is unusual.

But after a while, I decided to experiment with her placement within the photo.  I opened up this original photo in Photoshop CS4 and reoriented Stephanie’s position with the Ruler Tool (right-click the Eyedropper Tool to select the Ruler Tool).  You then simply draw your line from one position to another on your photo. Not to worry, dear reader, the line is not permanent.  Then, go up and select Image > Image Rotation > Arbitrary and hit “OK”.   Boom.  This repositions your photo.  Looks funny with you photo askew, doesn’t it?  But I wouldn’t leave you hangin’.  We ain’t done yet.

I went to Color Picker (again, on the left Tool Bar, which are the two squares.  I selected black for both the foreground and background color so I would match the black background of my photo.

After this, I created a new workspace (File > New), making sure to select Blackground Color in the pulldown menu entitled “Background Contents”.  I made this MUCH larger than the original Stephanie photo.  I then simply moved the photo around using the Move Tool (the thing at the top of the Tool Menu that looks like a cross made up of arrows at the top), cropped, and voila…a new version of the photo in just a couple of minutes!!!

This is sort of a bonus Tip of the Month.  I started writing and kept going.