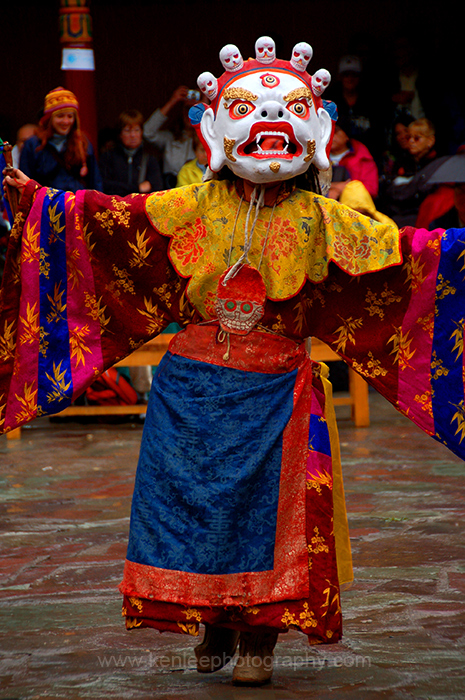 For my Featured Photo this week, I’m choosing the White Mask Dancer.  This was taken in some heavy Himalayan rain during the Hemis Festival in Ladakh, a Tibetan Buddhist region in India.

I want to emphasize here that sometimes you can still get really interesting shots in less than ideal conditions.  Sometimes, you have to work for them.  Sometimes really hard.  During many of the shots that I took, I was being pushed and jostled.  I sat in mud, in rain, next to crying kids.  During some of the shots, I even briefly had an adult sitting on my shoulder while I was seated cross-legged in the mud!

The monsoon rains came down hard.  I tucked my camera inside my waterproof jacket, pulling it out when shooting, since I had difficulty managing my umbrella, the jostling, and the photography simultaneously.

Prayer Beads, Ladakh, India, taken under less-than-ideal conditions….if you consider pushing, shoving, sitting in mud in monsoon rains, and someone sitting on your shoulder to be “less than ideal”.

The devout in the audience fingered their mala beads while watching the performance, devoted to the birth of Guru Padmasambhava, who brought Buddhism to these far Himalayan reaches of the world,  Many of these people had traveled from the farthest corners of Ladakh to attend the festival.

Unfortunately, after the festival at Hemis, returning to Leh wasn’t that simple. It continued raining. I stopped and talked to a few of the monks, and went inside the main temple to hang out. When I came out, there were still streams of people walking downhill. The problem is that there were no buses to meet any of these streams of people. The only buses we saw were already full and pulling away.

After about an hour of waiting for buses, about half of us, numbering in the hundreds, started walking downhill towards Karu, along the main highway. We were all soaking wet and shivering while walking downhill. I don’t know how long that took, but it was several kilometers away, and it seemed to take a really long time.