One of my photos of Bowling Ball Beach in Mendocino County has been featured in the LA Times as a Reader’s Summer Vacation Favorite!

Light painting and “stacked” multiple exposures during a hot night in the desert near Lone Pine, California.  The stacking was done in Photoshop CS4 to have a little more control over the light painting and to reduce noise.  This also marks the first time I used Noise Ninja to clean up the noise.  While it wasn’t bad at all, I felt that a little cleaning up was better, so I selectively “de-noised” parts of the photo via layer masking.

A hot evening, especially when running around “light painting”. But I also had a chance to lay on my back and watch the stars. I actually began dozing off when a car pulled up. You can see some of the light from the head lights on the arch.

The swirling stars are magical, a result of the long exposure of the camera capturing the movement of the stars. Polaris, the North Star, is in the middle, and all the stars appear to rotate around it, this movement, of course, primarily a result of the rotation of the earth.

On this post, I’m going to discuss Bodie, one of the most fantastic ghost towns I’ve ever seen, more than this photo specifically.  Bodie, north of Mono Lake, was a mining town, and one of the first towns to get alternating current electricity from Westinghouse, several years before the White House. 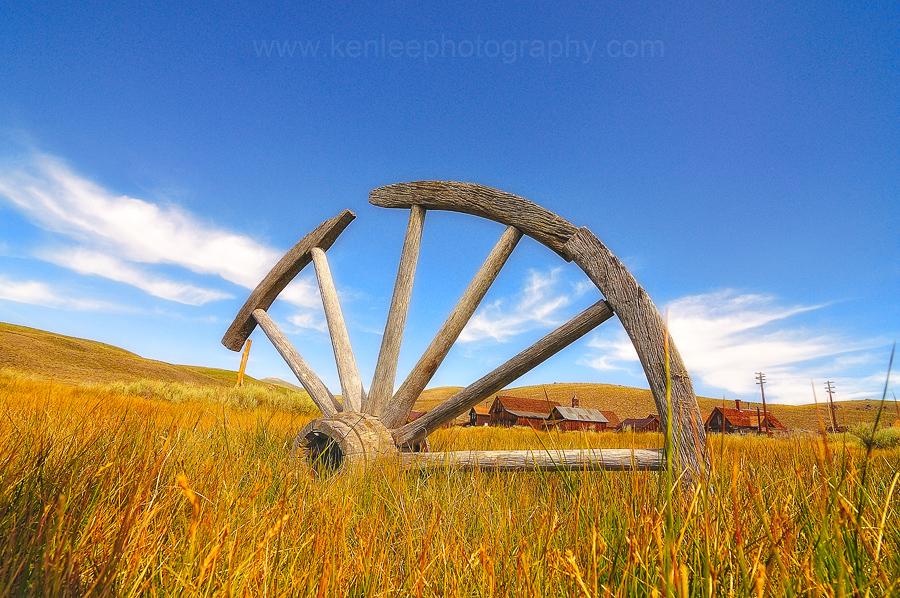 Bodie was infamous as a dangerous town, and the “badman from Bodie” was that era’s “bogey man”. Bad men, whiskey, whoring, gambling and more were endemic to Bodie. The Bodie brochure says that “by 1879, Bodie boasted a population of 10,000 and was second to none for wickedness, badmen, and ‘the worst climate out of doors’ One little girl, whose family was taking her to the remote and infamous town, wrote in her diary: ‘Goodbye God, I’m going to Bodie.’ The phrase came to be known throughout the West.”

The brochure also states, “killings occurred with monotonous regularity, sometimes becoming almost daily events. The fire bell, which tolled the ages of the deceased when they were buried, rang often and long. Robberies, stage holdups and street fights provided variety, and the town’s 65 saloons offered many opportunities for relaxation after hard days of work in the mines. The Reverend F.M. Warrington saw it in 1881 as ‘a sea of sin, lashed by the tempests of lust and passion.'”

One was of two men who got in a fight outside a saloon. Standing only 6-8 feet apart, each drew six-shooters on the other, emptying their bullets…none of them striking their adversary.

Another was of theft. Trees do not grow near Bodie, and in the extremely cold, windy winters at 8600 feet, wood was a very scarce and expensive commodity. So one person was dismayed to find that his stash of firewood kept getting smaller and smaller. To address this, he placed some black powder in one hollowed out log, and placed it back on the pile. Later that evening, a neighbor’s house exploded furiously, so much so that it could be heard miles away. His wood was never stolen again.

Oh, and yes, this is a photography blog, so the photo.  I’ve been using the Tokina 11-16mm since April, and absolutely love it.  This one was simple.  I just got down on my stomach, focused on the wagon wheel, and went for it.  No processing except for a little sharpening and contrast, the usual things that you do with a RAW file.  There were no filters used.  I don’t have a circular polarizer for the wide-angle because it creates bands, so yes, the sky really was that blue.

Please click on the photo to see it.  The algorithms for making the photo smaller seem to also make it appear blurry.  Thanks!

You could use a graduated neutral density filter to make the sky darker.  This works very well if the horizon is flat and doesn’t have rocks or mountains.

You could use Photomatix or another kind of HDR software.  A lot of people do.

But if you don’t have HDR software or flat horizons or graduated neutral density filters, all is not lost.  There’s a technique for doing it “by hand” that I believe creates a very natural look and can be done in many photo editors that can create layers, using a technique that was developed well over a hundred and fifty years ago!  Read on, my friend, read on!

Combining two exposures together
One way of dealing with dynamic range is to create two versions of the same photograph. That’s what was done with the photo above, a long exposure photo of eight seconds in which I exposed for the foreground.

Here’s how I created it:

1.  I created two versions of the same photo.  Using View NX 2, which I use for my RAW photos, I created a second version of the photo in which I lowered the exposure slightly, revealing the true colors of the sky.  I don’t make the sky too dark because otherwise the final result can look abnormal.  Maybe -1.0 exposure.  Play around with this and do it by feel.

I then clicked on the other TIFF labeled “sky” – in other words, the photo in which I exposed for the sky – and pasted the “sea” photo in (Mac “Apple” + “V”; PC “Control” + “V”).  I could now only see the “sea” photo that was exposed for the foreground only.  The Layers Menu now showed two layers, the background being the “sky” photo. Cool. On all my versions of Photoshop, the Layers Menu has always defaulted to the lower right corner of the monitor in the event that you have difficulty locating it.

3.  I erased part the top layer to reveal the sky. It’s really that simple.  In Photoshop CS4, I selected the Eraser Tool, which should be found on the upper left side in a vertical bank of tools.  I like to use the Brush Tool, altering the size of the Brush depending on what I am doing, and starting off with 100% opacity and 100% flow.  You can change these as you see fit on the upper left corner in the horizontally-oriented taskbar of Photoshop.

So what I did was first select a very large brush, and at 100% opacity, kept erasing to reveal the ideally-exposed sky in the background layer underneath. As I got closer to the horizon or the rock, I made the brush size considerably smaller and changed the opacity to 50% to blend the borders better.

This part is hard to describe and takes some experimentation and patience, as you’ll probably need to zoom in on your photo near the horizon or edges to really see what you are doing.  This is art, after all, and how you do this depends on your taste and aesthetic.  Make sure you keep saving the image as you go in case Photoshop crashes and you lose all your work.  I personally like to blend the area where the water meets the sky a little bit rather than attempting a hard, discrete “line” of erasure.  Again, this is about aesthetics.  It’s art, so do it as you feel it looks and feels best.

When you’re finished, you should have a nicely blended image in which the sky looks like what you remembered, and not a white blown-out blob, and the foreground is nicely exposed as you originally did it.  Blending them artfully with the eraser is key.  Once you do this once or twice, you’ll get the hang ouf it and be able to do it quite nicely.

This technique is seriously old school!
Think dealing with dynamic range like this is relatively new?  Would you be surprised if I told you that Gustave Le Gray were doing this in the 1850s?  That’s right, the idea of combining more than one exposure was pioneered way back when your great-great-great grandfather was just a gleam in his pappy’s eye.  Le Gray combined two negatives for the very same reason I have here, using one negative for the sky and another for the sea, and then combining them into one photo (positive).

Some people have this attitude that this is fake and you shouldn’t Photoshop.  But if so, people have been faking it for quite some time.  No, we’re just exposing for the sky and for the sea.  And I would submit to you that a photo of a sky looking like a white blog instead of the deep blues and yellows that I saw would be unrealistic.

Thank you for reading, and thank you if you comment below!!!