Although I do night photography, I usually don’t photograph specific celestial events. But I had never photographed a comet before, and I couldn’t stay away. 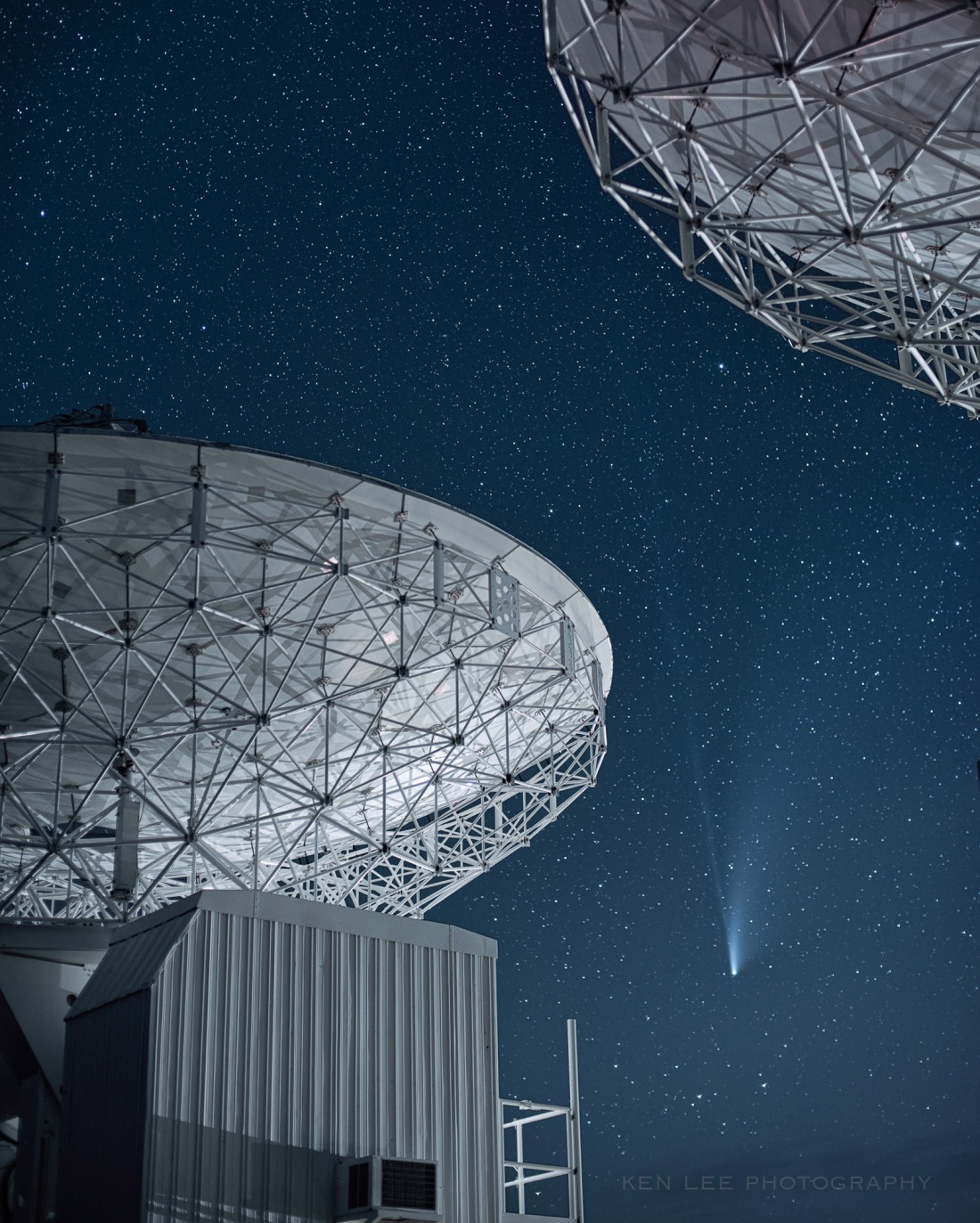 I guessed that certain places such as Alabama Hills, Joshua Tree National Park, or Mono Lake would be filled with people photographing Comet NEOWISE, so I decided to photograph at Owens Valley Radio Telescope. There was less chance of it being overrun since one needed to have permission to photograph there, which I had. Thank you, Caltech!

I had never photographed a comet before. What should I bring?

I brought most of my lenses. Better safe than sorry. But I would need a strategy.

Most of the time, I photograph at night using ultra wide angle lenses such as the Pentax 15-30mm f/2.8 or the Irix 15mm f/2.4. However, I was concerned that the comet might look really small with ultra wide angle lenses. I attached my 50mm f/1.4 prime lens, thinking that this might give me some reach. I did have a Nikon 28-300 f/3.5-5.6 lens, but I felt that I might need a faster lens. Also, I thought that a f/1.4 prime lens might be sharper.

This thankfully seemed to work well.

Determining how to photograph the comet

Sure enough, the comet was visible to the naked eye around 9:30 pm. It looked beautiful. I decided to set up most of my photos so that only part of the radio telescope would be visible in the frame. The viewer would be able to fill in the rest. This would also set my photos apart a little from most people’s photos, as most people tend to photograph the entire apparatus.

Although the 50mm f/1.4 has a hard stop at infinity, it doesn’t always mean that this is “true infinity”. I manually focused, adjusting the lens several times before photographing, and adjusting again between shots, as there seemed to be some variance with this lens for whatever reason. After it seemed to “settle down”, I applied gaffer’s tape to the focus ring so it would stay in place. 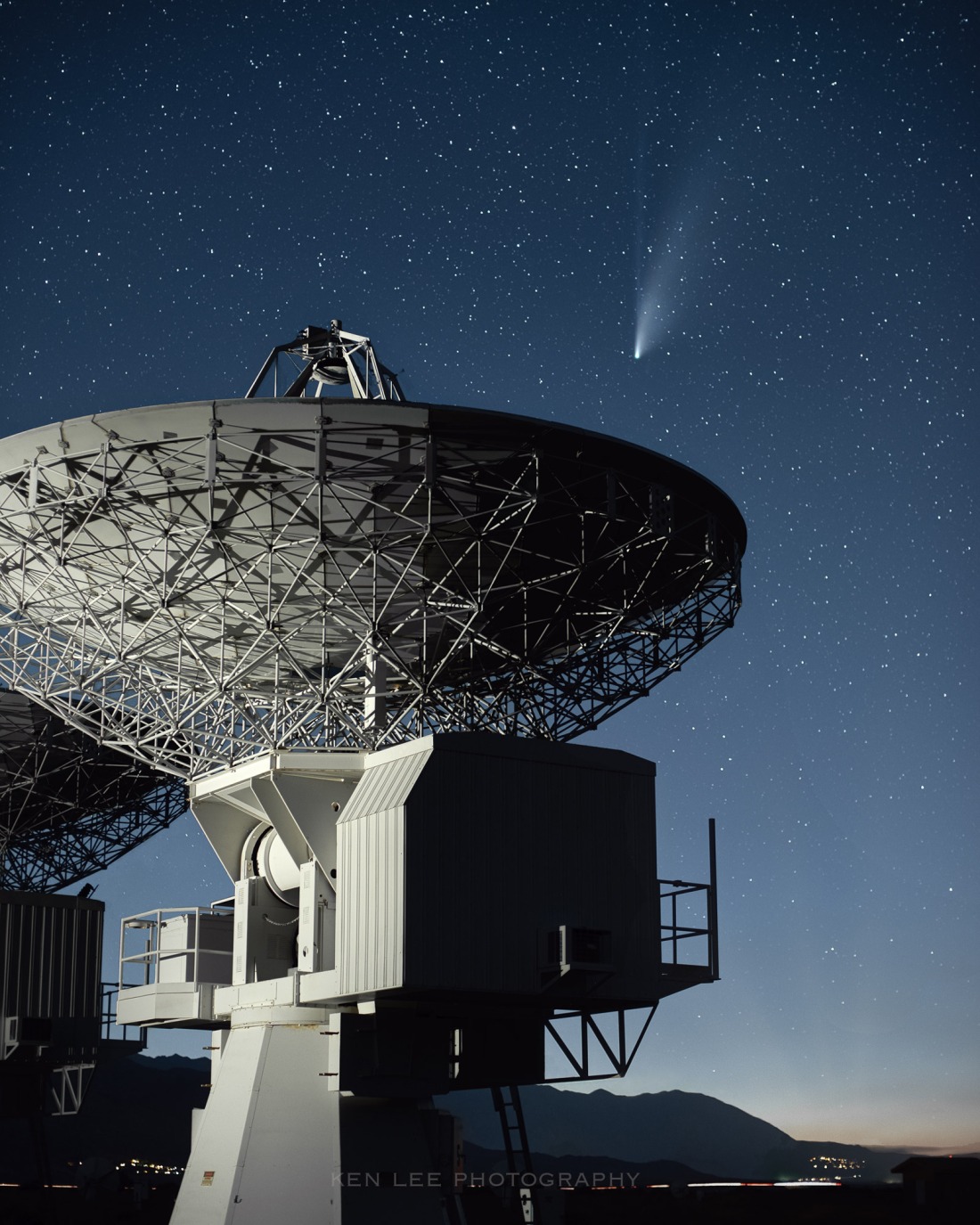 Above: Nikon D750 and 50mm f/1.4 lens. Eight seconds at f/2.5 at ISO 2500. This particular photo was created at 9:32 PM, just when Comet NEOWISE was becoming visible, still with a sliver of the moon in the sky. Later, the comet would become obscured by the light pollution from Bishop to the north. This was the first photo of the evening. I must admit that I let loose with an audible “Yessss!” when I saw the comet so clearly on the LED screen.

I photographed at eight seconds because much longer than that and the stars would begin to to register as trails rather than pinpoints due to the rotation of the earth. With a 50mm, the lens is zoomed in noticeably more than with an ultra wide angle lens such as a 15mm. With 15mm lens, I often photograph at 15 or 20 seconds, not eight seconds.

I chose f/2.5 after experimenting with photographing at wider apertures such as f/1.8 or f/2.0. With those, I was experiencing lens aberration called coma at the wider apertures, making most of the stars appear as if they had sprouted wings! It’s a balancing act. We need a wider aperture to let in as much light from the stars as possible. But we also don’t want lots of distortion. Stopping down a little helped reduce the aberrations.

And finally, I decided on ISO 2500 because the Nikon has something called ISO invariance. This means that I could boost the exposure without penalty of noise in post-production rather than increasing the ISO in the field.

I usually show up with two cameras. My other camera is a Pentax K-1 and 15-30mm f/2.8 lens. I decided to photograph at 30mm to still enlarge the comet somewhat and photograph a bit more of the radio telescopes. 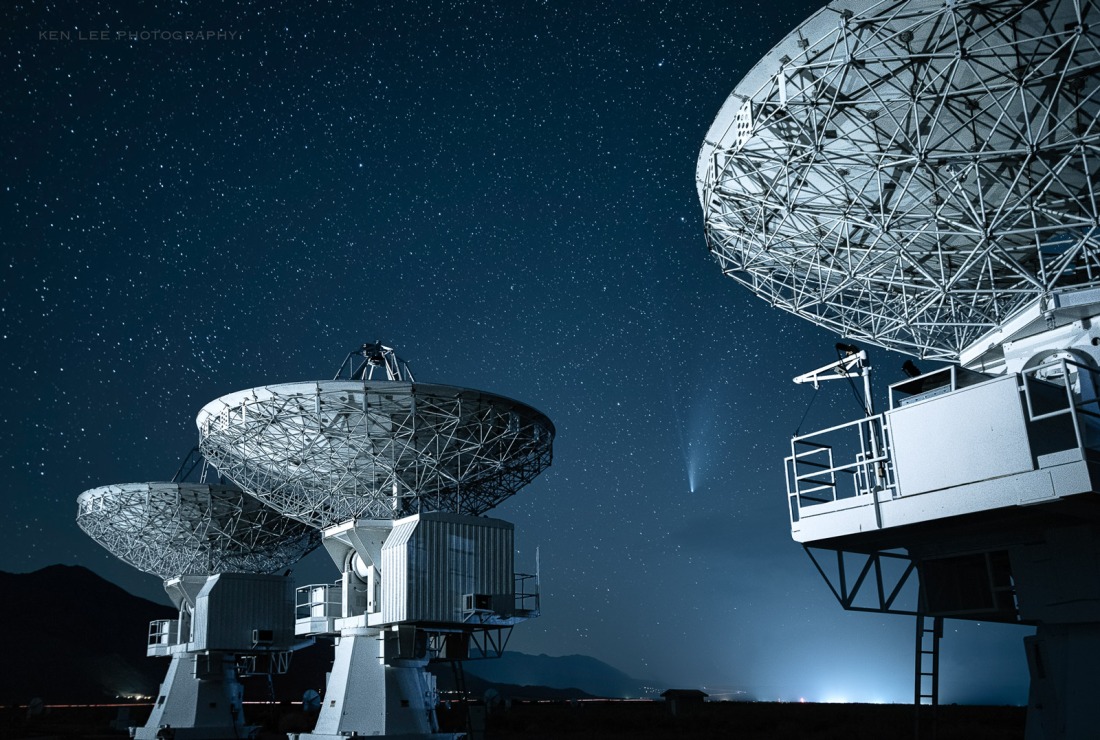 I wanted to illuminate the radio telescopes. They would have almost been silhouettes otherwise. I used a handheld ProtoMachines LED2 light painting device while the camera shutter was open.

Until we meet again, Comet NEOWISE!

I thoroughly enjoyed the experience of being in a quiet desert environment and photographing these magnificent radio telescopes and a comet that won’t come around again for about 6800 years. Just think what fantastic camera equipment we’ll have next time around!

2 thoughts on “How I got the photo: Comet NEOWISE”