Skip to content
Ken Lee Photography Photo Tip of the Month October 7, 2020December 4, 2020
If you’re a night photographer like me, you’d rather be out photographing than fiddling with Photoshop. But if we are going to create our best work, some time in the digital darkroom is needed. One of the more time-consuming aspects of post-processing for me has been creating Layer Masks to blend night photos of the sky and earth.
However, I believe I’ve found two methods that are quick and easy. But let’s explain what sort of photos we are blending first…and why.

The enemy of high-ISO Milky Way photos is noise. However, we can borrow a method from astronomers called stacking to reduce noise. Stacking is a process in which the photographer numerous photos in succession and then utilizes a program to easily track stars on multiple images, align stars and stack them.

How do we create low-noise foregrounds in Milky Way images?

The issue: while star stacking programs are great at reducing noise in the sky, we want low-noise foregrounds too.
Two common methods of creating low-noise foregrounds are photographing the scene during “blue hour” (half an hour or so after the sun has set) and light painting (illuminating the scene with your own light).
Both techniques use low ISOs, and both can be quite effective. Which one you choose depends on circumstances and aesthetics. And both methods involve keeping the camera and tripod setup exactly the same for every shot. In the case of the “blue hour” set up, that involves keeping the setup in the same place for possibly several hours.
For this article, we will use a “blue hour” example to demonstrate how to blend a Milky Way with our low-noise foreground easily.

Blending the Milky Way with the low-noise foreground: method one 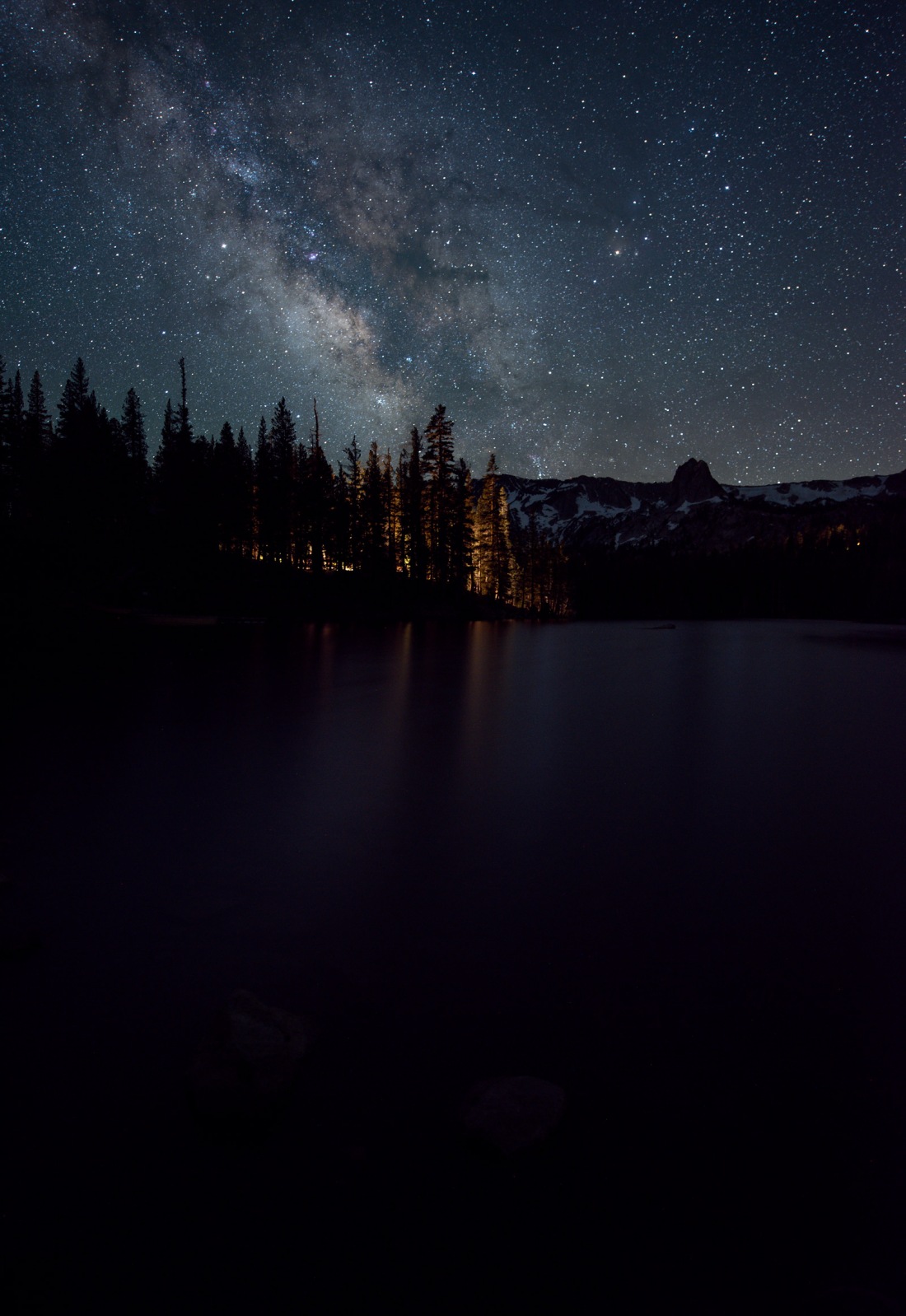 Above is the stacked, unprocessed photo of the Milky Way sky in Mammoth Lakes, CA. I began with this as my background layer in Photoshop.

Above is a photo of my low-ISO “blue hour” photo. I brought this in as a layer over the top of the background layer. Then I made two copies of this above for a total of four layers, three of them identical.

Above: On the very top copied layer, I boosted the contrast and brightened the “blue hour” image substantially. I wanted to create a black and white Layer Mask, after all.

Above: I then turned the image black and white (“Image” > “Adjustments” > “Black & White”). You can see my settings in the image above. I was trying to get the sky as white as possible and the foreground as dark as possible while still keeping the fine details in the trees.

Above: I boosted the contrast and brightness again to make the scene look even more like a Layer Mask. I may not have needed to do this if I had taken a photo while the sun was out.

Above: I took a black paint brush and began painting the area around the trees, including the lighter colored tree trunks and the structure, leaving the details of the leaves alone. 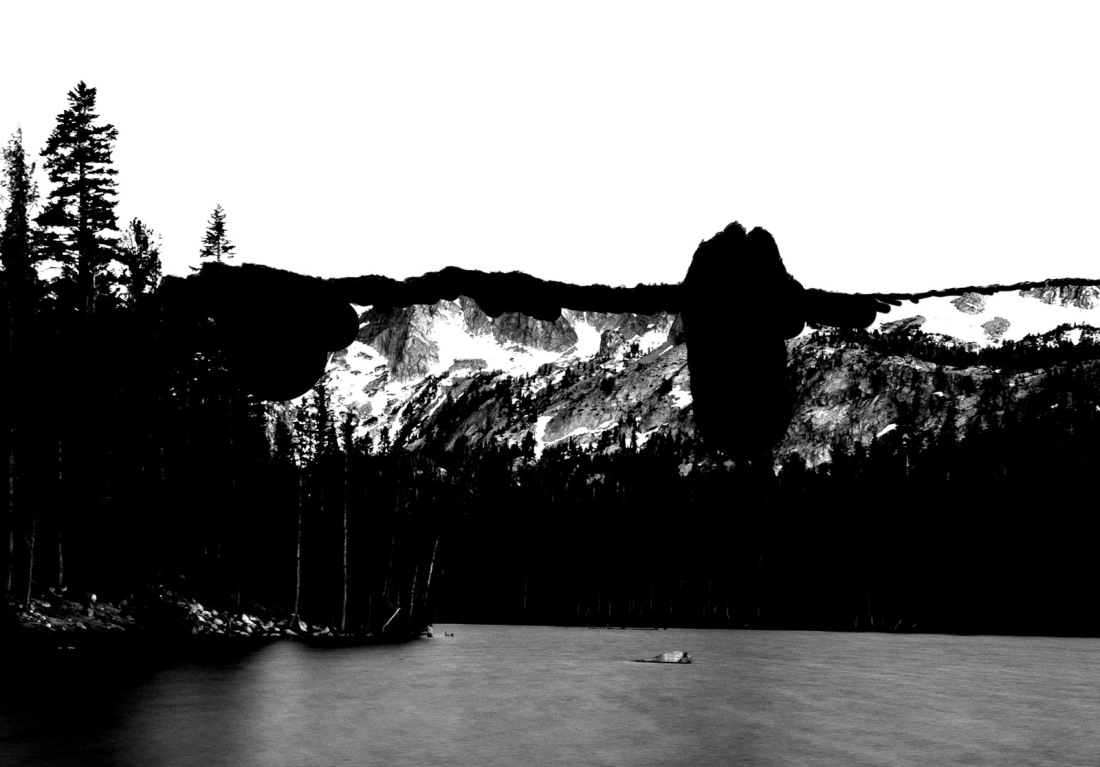 Above: the mountains had snow on them, so they did not turn dark. However, they are part of the foreground. Black paint brush to the rescue. I painted the mountains black as well.

Above: I continued the process of painting everything black. Here, the brush is larger because I have already painted the detail-oriented parts by the trees and mountains. 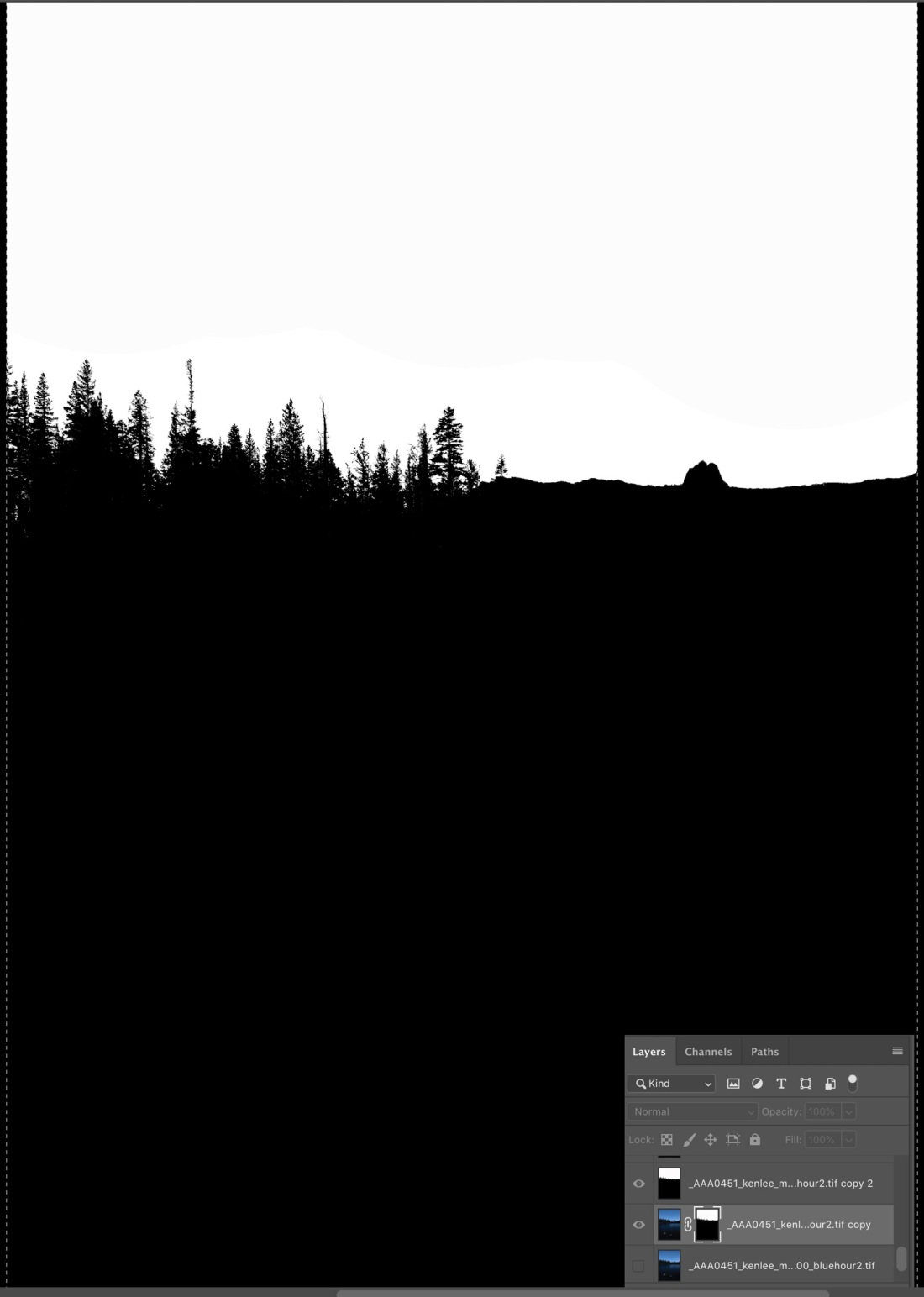 Above: As you can see from the Layer Section inserted here, I began creating the mask. Here’s how I did it.

1.  I copied the entire black and white layer that you have just created. I am on a Mac, so I use “Command A” to select everything, creating the “marching ants” on the periphery, and then “Command C” fo copying the selection.

3. I hit “Alt-Click” to bring the Layer Mask up on the main screen. Then I selected everything (“Command A”) so that the “marching ants” were again surrounding the image. Then I pasted (“Command V”). This made the mask look identical to the layer above. But wait…I had one more tiny step!

4. I inverted the mask by hitting “Command I”. The black and white parts traded places. All was good.

I no longer needed that top layer. I could delete it since I had my Layer Mask.

Above: this image shows what my high-ISO sky looked like with my “blue hour” foreground.

Now, obviously, you can tell they were taken at different times. From here, I would need to process both the foreground and the sky to make them look more cohesive and natural. How you do that is up to you. I find that this can differ dramatically from photo to photo.

I processed the sky separately initially, creating more of a blue sky and bringing out the detail of the stars. I also decided to have more of a blue with the foreground as well. Then I began processing them together to have them “gel” more together, eventually ending up with the final photo.

The importance of increasing contrast and brightness

I began greatly increasing the contrast and brightness to create masks after I had begun attempting to use Luminar 4’s AI Sky Replacement Algorithm and seeing that it worked better if I did so while also experimenting on creating Layer Masks in Photoshop. However, after watching a very useful YouTube tutorial by Michigan Milkyway entitled “Tree masking for tracked night sky images in Photoshop”, I realized that I had to boost the contrast and brightness far more than what I was doing for either method.

Blending the Milky Way with the low-noise foreground: method two

I promised that I would show you two methods. This other method simply uses Luminar 4’s AI Sky Replacement. This works magically well with day photos and reasonably bright blue hour photos. However, its algorithms struggle with night sky photos unless you treat them beforehand by greatly boosting the contrast and brightness or exposing greatly to the right in the first place.

Above: in Luminar 4, I opened up the photo of the “blue hour” foreground and opened “AI Sky Replacement”.

Above: in AI Sky Replacement, I loaded a custom sky, which of course was my own high-ISO sky. After that, I adjusted the “Horizon Position” slider so I could actually see the Milky Way sky, and then made several other adjustments to create a good, seamless mask and create various aesthetic adjustments. This process took less than a minute.