Recently, in conjunction with the October 2020 Adobe MAX Creativity Conference, Adobe released the eagerly awaited version of Photoshop version 22.0, which comes with quite a few new features, many of which are powered by AI.

One of the most anticipated features in Photoshop is their AI-powered Sky Replacement. While I don’t generally replace skies, I do take low-ISO night or “blue hour” twilight photos of the foreground, then take successive “stacked” photos of the night sky, and then blend them together. This can be time-consuming, so I am always interested in ways to quicken the process.

Luminar 4 can only use JPG or TIFF files. There is no such limitation with Adobe. When used in Photoshop, Luminar 4 will create another layer. Photoshop offers the choice of creating another layer or a duplicate layer, including all the masks and the layer of the sky that come with it.

Another difference is that Photoshop version 22 has so far been absurdly slow for almost every function on my 2017 iMac with 40 GB of RAM. Photoshop 2020 was also very slow. Luminar 4, and for that matter, Photoshop 2019, run very quickly. Not everyone experiences this, but it’s worth mentioning.

I began with a photo that I took of an unprocessed 3 minute low-ISO photo of a radio telescope taken at night. Luminar 4 struggled with identifying the night sky. How would Adobe fare?

Adobe recognized the night sky as being a sky, but struggled to determine what was sky and what was not. And as previously mentioned, I had the choice of creating a duplicate layer, which would allow me to tweak the layer further in a non-destructive manner. In this example, I chose one of Adobe’s skies, as numerous skies come with the program. 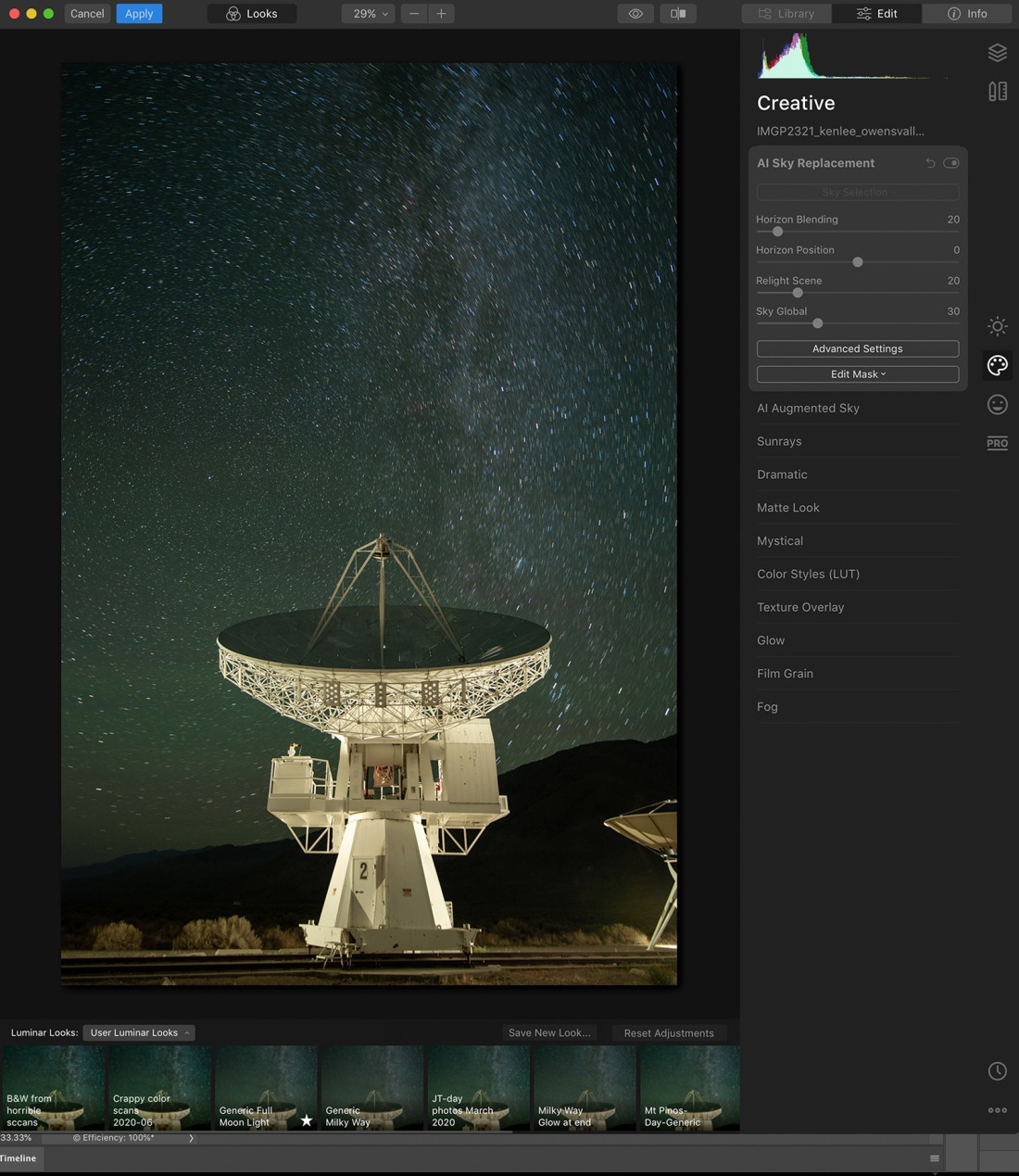 Above, you can see that Luminar’s Sky Replacement feature is ghosted. It could not recognize the night sky at all. 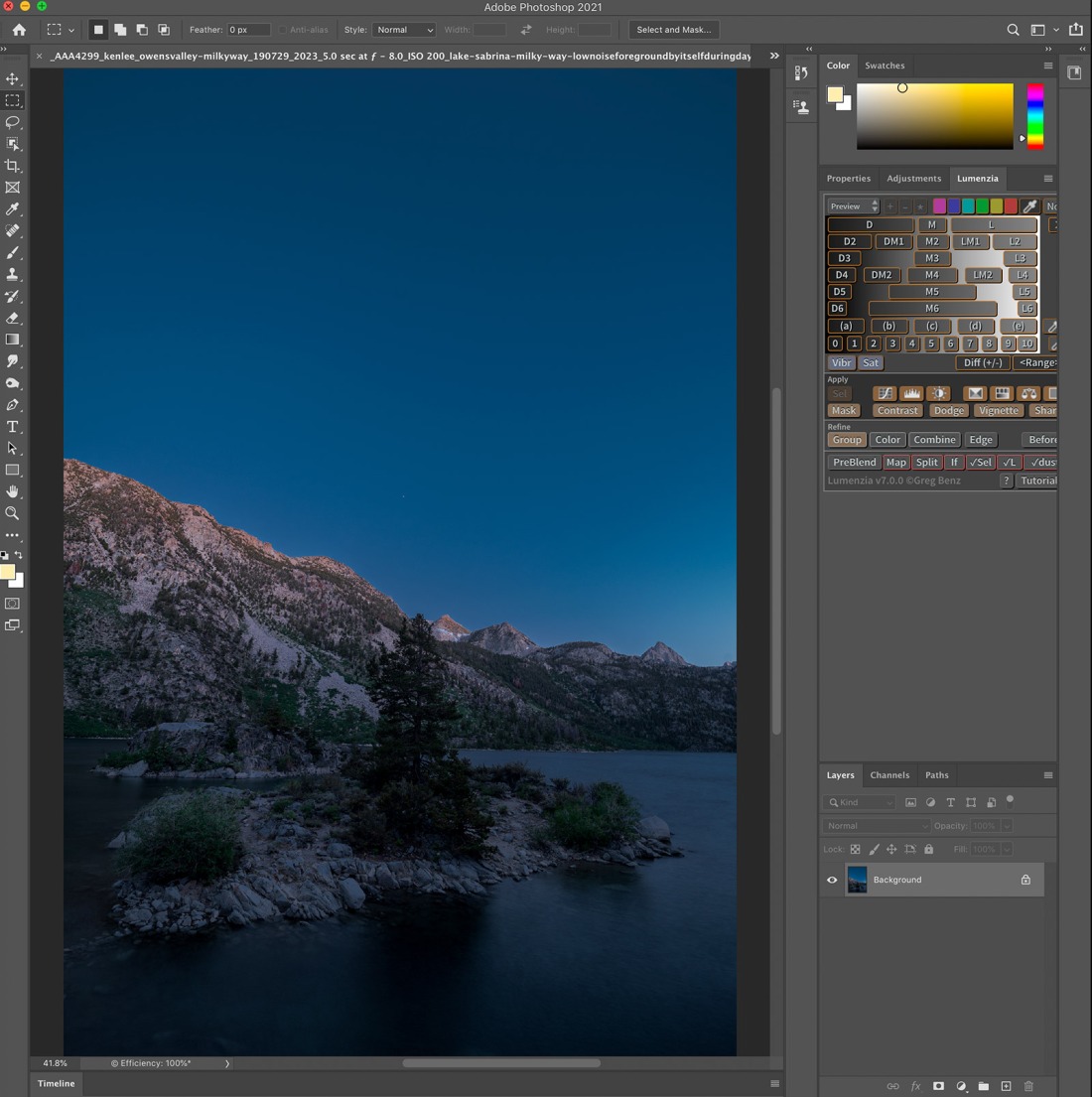 I chose a “blue hour” photo of a lake in the Eastern Sierras, taken not long after the sun had set. I decided that this time, I would “drop in” one of my skies, a “stacked” Milky Way photo taken with the same setup later that evening. 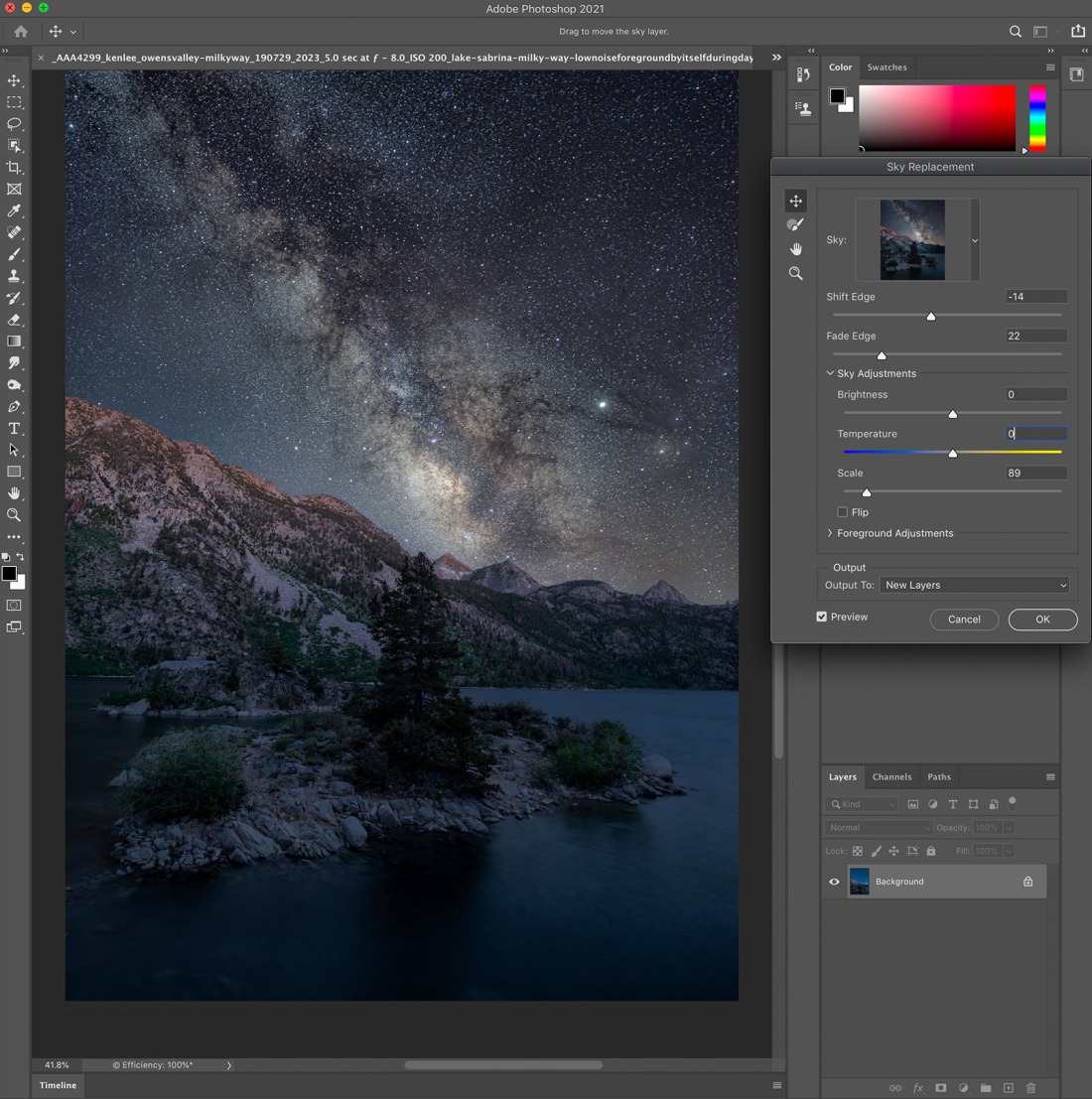 Adobe performed quite admirably here, dropping in the sky, although I did have to adjust the size slightly to get it to match. This was easily done.

Next was Luminar 4. Luminar recognized the sky but struggled with both the blending of the sky itself as well as the horizon. Luminar struggles with darker skies. If I had increased the brightness of the Eastern Sierras photos by a stop or two, it would have been fine.

All examples of both programs use day photos for sky replacement. And for good reason. Both their AI recognize it very well. But how would they recognize something complicated such as trees with lots of fine leaves?

I used a bright day photo of the forest in Mount Pinos in the mountains north of Los Angeles as the base photo. I decided to use the same Milky Way photo as the previous attempt. This would look incredibly fake. However, I felt the darkness would create greater contrast. We could then  examine the blend by zooming in close to see what was happening with the leaves of the trees.

Next was Luminar 4. This also performed admirably. Although a little darker than the Adobe version, this could have been easily adjusted by using a slider. First appearances also looked good!

I’m ready for my close-up!

For Instagram or Facebook, either sky replacement would look good. But what if we zoomed in? What if we printed this at 100%? For this, I zoomed in to 200% so you could see the masking in detail.

Looking closely at the details of the leaves and branches in the Photoshop version above, we can see that it’s generally quite good, but that some of the branches and leaves are missing.

Examining Luminar 4’s version above, we can see that the leaves and branches are noticeably more intact. The mask, even zoomed in at 200%, is quite good.

Which one is better?

I don’t know that there is a clear, definitive winner here. We all love “bottom line” answers, and I would give you one if I had one.

For day photos, Luminar 4 created a better mask. It requires JPGs, although in practice, I doubt this will matter with almost anyone.

However, for night photos, Luminar 4 struggled immensely. Photoshop was able to create a mask even with the very dark night photo of the radio telescope, no easy feat. And with the ability to duplicate layers, one could work on the mask some more to get it to blend better.

I for one am happy to have both. And with LuminarAI and subsequent versions of Photoshop looming on the horizon, I’d say that things are looking good. Whatever your position on sky replacement, we all can agree that if AI can make our repetitive or time-consuming tasks faster, then we all win.

I thought I would share this just for fun. I finished this after I created the examples above, experimenting with both Photoshop and Luminar 4. This is a photo of the radio telescope facing north. This is a version of the first photo combined with “stacked’ photos of the starry night sky to reduce noise reduction. I masked this using a combination of Starry Landscape Stacker and Photoshop CC 2019.